As a medieval reenactor, and brewer, I was unsurprisingly asked – begged! – by my kid to help him make root beer. We both quite like the taste of root beer, and the idea of going on a root-and-herb scavenger hunt in the back swamp spoke to both of us! The cunning plan was to have the kid enter his root beer in a brewing competition hosted by a medieval reenacting Society (SCA.org) and thus he had to know at least some of its early history. But – how period is root beer? The two ingredients most often mentioned to make root beer are sarsaparilla and sassafras, so let’s first take a look at those.

Sarsaparilla (Smilax ornata; right) was introduced to Europe in the 16th century by the Spaniards, first from Mexico and later from Honduras. Mexico, Central America and many parts of northern South America abound in various species of sarsaparilla, valued by the natives for their, more or less, medicinal qualities. The natives value its nourishing and healing qualities so much they would drive their cattle to areas where it grew in abundance in order to feed on the plants and receive its benefits.

Sassafras (Sassafras albidum; left) was a well-known plant to the natives of the southwestern United States way before the Europeans came around. It had many purposes, including cooking (to flavor bear fat, to cure meat) and medicinal. The European interest in sassafras brought Europeans into closer contact with the Native Americans during the early years of settlement in 16th and 17th century Florida, Virginia and parts of the Northeast. Early European settlers enjoyed the aromatic scent of sassafras – according to legend, Christopher Columbus finally found land because he could smell the sassafras! As early as the 1560s, French visitors to North America discovered the medicinal qualities of sassafras, as well as the Spanish who arrived in Florida.

Sassafras trees were reported as plentiful at the arrival of the English on the coast of Northeast. Sassafras bark was sold in England and in continental Europe where it was made into a dark beverage called ‘saloop’ – touted to have medicinal qualities and used as a medicinal cure for a variety of ailments. This refreshing beverage was sold in place of tea and coffee, which were much more expensive, and was served in a similar way with milk and sugar. Sir Francis Drake was one of the earliest to bring sassafras to England in 1586, and Sir Walter Raleigh was the first to commercially export sassafras in 1602. Since the bark was the most commercially valued part of the sassafras plant due to large concentrations of the aromatic safrole oil, the trees would be stripped of their bark  – which kills the tree. This meant that as significant amounts of sassafras bark were harvested, supplies quickly diminished and sassafras became more difficult to find. For example, while one of the first shipments of sassafras in 1602 weighed as much as a ton, by 1626, the English colonists failed to meet their 30-pound quota. Unfortunately, over-harvesting is not a modern thing either.

“In all these places we found no people, but signes of fires where they had beene. Howbeit we beheld very goodly Groves and Woods replenished with tall Okes, Beeches, Pine-trees, Firre-trees, Hasels, Wich-hasels and Maples. We saw here also sundry sorts of Beasts, as Stags, Deere, Beares, Wolves, Foxes, Lusernes, and Dogges with sharpe noses. But meeting with no Sassafras, we left these places with all the foresaid Ilands, shaping our course for Savage Rocke discovered the yeere before by Captaine Gosnold, where going upon the Mayne we found people, with whom we had no long conversation, because here also we could find no Sassafras. De-parting hence 3 we bare into that great Gulfe which Captaine Gosnold over-shot the yeere before, coasting and finding people on the North side thereof. […] Bancroft, following Belknap, identifies Whitson’s Bay with the harbor of Edgartown, Martha’s Vineyard, which is in the latitude of 41° 25g. […]and finding a pleasant Hill thereunto adjoyning, we called it Mount Aldworth, for Master Robert Aldworths sake a chiefe furtherer of the Voyage, as well with his Purse as with his travell. Here we had sufficient quantitie of Sassafras.”

What this rather long introduction means is that both main root beer flavors – sarsaparilla and sassafras – were known in 16th century Europe, and at least sassafras was used in a drinkable medicinal concoction in Europe. Unfortunately, it was not (yet) fermented… The tradition of brewing, or fermenting, root beer is thought to have evolved out of other European small beer traditions that produced fermented drinks with very low alcohol content. These were thought to be healthier to drink than possibly tainted local sources of drinking water, and enhanced by the medicinal and nutritional qualities of the ingredients used. For instance, the 14th century recipe Tizanne Doulce (like a tisane, or infusion) uses barley, licorice root and crystal sugar to make a root beer-like beverage.

TIZANNE DOULCE. Take water and boil it, then for each sester [the sester of 8 pints] of water put in a bowl heaped with barley, and it matters not if it be hulls and all, and two parisis [2 1/2d.] worth of liquorice, item, figs, and let it be boiled till the barley bursts; then let it be strained through two or three pieces of linen, and in each goblet put great plenty of crystallised sugar. Then the barley is good to give to poultry to eat to fatten them. Note that the good liquorice is the newest and it is a fresh greenish colour, and the old is more faded and dead and is dry. 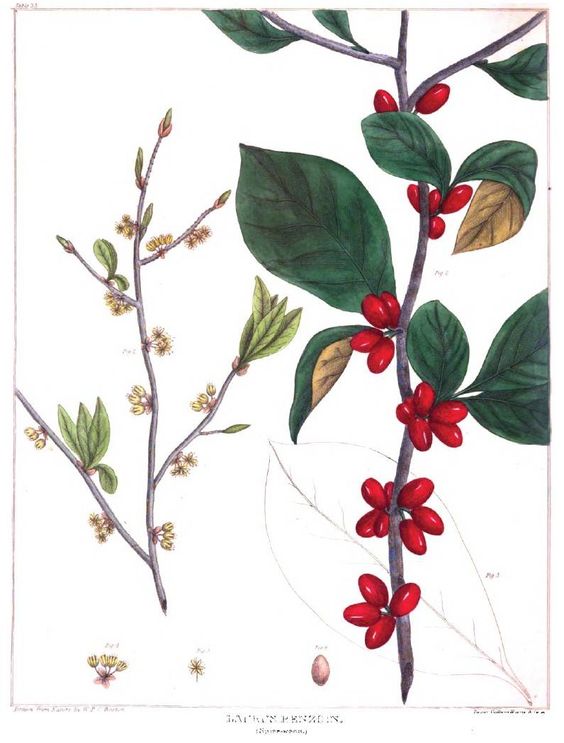 We chose these specific roots, barks and leaves as these either grew in the back yard (our property adjoins a New York State Protected Wetland, so plenty of bio-diversity) or we already had in the kitchen cupboards. Even though I met someone via Facebook who lived in the South and had a sassafras tree in his backyard and was willing to ship rootstock, unfortunately, facebook ate the conversation and he was never heard from again… so this time around, at least, no period-correct Southern grown sassafras. We substituted with black birch, as that has a root beer typical wintergreen-like flavor, and spicebush (right).

We went on a scavenger hunt and gathered as much as we could from the back yard and surrounding property. Ironically,  in our modern middle Ages it is not possible to buy fresh, green licorice; therefore we’ll have to do with the ‘dead’ dry stuff. The kid made name cards to label each baggie of ingredients.

Then it was time to brew! The kids scraped the bark off the wintergreen and spicebush twigs. He chopped the dandelion root and grated the ginger root. He broke the birch bark, the cherry bark and the dried licorice root into little pieces. He picked the juniper berries from between the greens. And crushed the cinnamon stick. Mom got homegrown hops from the freezer (he’s not touching the hops supply). He measured everything on the scale, and added it all to the big sauce pot. He measured and added the 2 ½ quarts of water. Turned on the stove, and brought it up to a boil. When boiling, it was turned down to a simmer, to simmer for 20 minutes. When done, mom put the pot in the sink in cold water to cool. The infusion was left to sit overnight.

The next day, he poured some reclaimed ale yeast into a 1 gallon carboy, and poured the infusion – through a filter – into the same carboy. He added 1 cup of sugar, for the yeast. He then shook the carboy well to dissolve all the sugar, and carefully poured the infusion into his recycled fliptop soda bottles. They were left in a warm place to start fermentation. They will stay out for a few days, until carbonation is visible, and then be refrigerated to stop/slow down the yeast.

A table showing the different botanicals that can be used in root-beer (X marks the ones we used):

Note: black birch and the evergreen Gaultheria are both sources for the scent wintergreen.

Note: while in medieval European brewing Juniperus communis was used, as we have several mature trees of Juniperus virginiana we used that instead. Like its European counterpart, Virginian juniper is also used to flavor gin.

Medieval European plausibility of our chosen ingredients: [yes / no]

And as Sir Kenelme Digby so aptly adviced, in his slightly post-period brewing cornucopia:

“You may use what Herbs or Roots you please, either for their tast or vertue…”