In general, brewing has three steps in the preparation of beer: malting, mashing and fermentation.

Malting is the treatment of the brewing grain to aid in the dilution and conversion of the grain starch into sugar water. This process consists of several steps. First the grain is steeped in water, and when warm enough it will thus sprout. The process of sprouting releases an enzyme which transforms starch into sugar inside of the grain. When the sprout is just right, the process is stopped by drying the grain. This can be done by drying exposed to air, or by exposure to heat and roasting in more or lesser degrees, as desired, in special malting ovens. Unheated malted grain gives very light liquor. The longer the grains are roasted, the darker the beer tends to get. The malted grains are then broken up into little pieces by crushing or flattening.

Mashing: the next step is the actual brewing. First warm water is added to the crushed malted and unmalted grains and it is made into a mash. The sprout starches and enzymes leach out and during the steep the enzymes convert starches into grain sugars. This sugary mixture is called the wort. It is possible in early medieval brewing the wort was only heated shortly and not boiled at all, as the step of mashing and heating would happen in the same vessel and thus include all the grains (boiling often has grain fall apart). Due to the introduction of hops in later medieval brewing, a separation of the mashing and boiling step was necessary as hops needs to be boiled for an hour or more to benefit from its preservative effects.

Fermentation: when the mash is steeped long enough for as much of the starches to be converted into sugars, then the liquid wort is separated from the grain solids. The grain solids are called spent grains and could be mashed multiple times. The wort would then be transferred to the wooden fermenting tun where it would either spontaneously ferment, or yeast (barm) would be added. If brewing hopped beer, before fermentation the wort first needs to be boiled with hops. Either the wort is brewed with hops in its entirety, or a small amount of wort can be used to make a concentrated hops infusion. After boiling the hot wort would be collected into a large-surface, shallow-depth container to cool. When cooled, it would be drained into the fermenting tub, after which it would either spontaneously ferment, or yeast (barm) from a previous brew would be added.

Separation of the wort from the spent grains after mashing could have happened in several ways. Several kogelpot brewing vessels were found with a stoppered hole, probably so it could be used both as the heating vessel as well as a filter. For larger vats the stuikmand, a tapered wicker basket (see figure), could be used. This would be pushed into the mash to create a filtered pocket so the wort liquid could be dipped out with a wooden scoop. The wort would then be transferred to 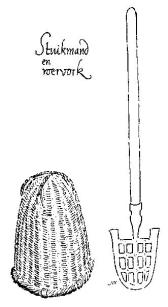 When the mash was heated separately for hopped beer brewing, a large wooden tun with a false bottom, a plank perforated with small holes, could be used for mashing. The grain mash lay on top of the perforated plank and when done, the bottom drain or plug would be opened (by removing a stick that plugged the hole from above) and the wort would be drained off the grain solids while being filtered through the perforated plank.

Archaeological evidence found in the vicinity of Groningen, the Netherlands, indicates the low lying peat bogs around the city were dotted with many small mounts, called terps. These mounts were briefly inhabited during the 13th century and deviate from other peat-reclamation area dwellings in that a unique inventory of pots and pans were found in the dwellings. Huge spherical earthenware pots, called kogelpotten or ball jars, with volumes of 100 liters or more, and pieces of thick walled stove segments, indicate efficient heating of water. Small pestles likely used to grind grain, and large spherical pots with a spout at the bottom useful for filtration, were also found. Combined with good drinking water supplied by a well sunk down to the sand bed all these indicators make a good case for the brewing of beer. A complete stove, or komfoor, found in Drenthe shows it functions similar to a modern rocket stove with an enclosed burn chamber with an open cooking top and a hole with a stopper to the side, to either add more fuel or limit the intake of oxygen. This stove also has three nocks on the inside rim to allow for smaller kogelpotten to fit without falling through. The kogelpotten found in association with this stove ranged in volume from circa 2 liters to 10 liters for the largest. 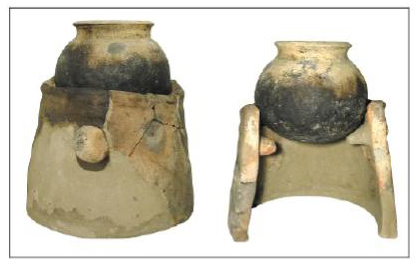 Kogelpot on stove used for cooking and brewing.

By the end of the 13th century, earthenware brewing pots reached their maximum size. Brew volumes of a thousand liters or more were only possible by new methods of production: the introduction of hammered out copper kettles. By the 15th century even larger production utensils were required to keep up with demand, and copper smithies developed riveted thick plate kettles. These large cylindrical kettles were able to withstand the pressure of several hundreds of liters of liquid, and this in turn lead to an increase in size and structure of the heating ovens. After brick ovens had been introduced, changes in brewing were largely limited. 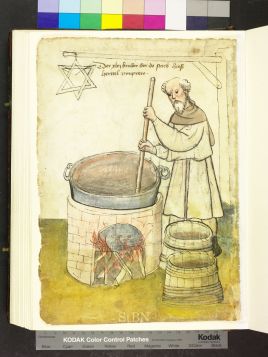