Egg over Mead-ium: Measuring gravity with an Egg was originally published at Zymurgy online: https://www.homebrewersassociation.org/how-to-brew/egg-mead-ium-measuring-gravity-egg/

Being frugal and having beekeeping friends has benefits for the experimental meadmaker, and occasionally I get to play with crystallized comb or rinsings from extruded frames. But as the sugar concentration of washed honey is unknown, the diluted honey has to be checked. While we have access to the wonderful glass hydrometer, historic brewers used an egg. Really.

The floating egg technique works by way of the internal design of an egg, which includes an air sack at the rounded end of the egg for the bird embryo to breathe. A fresh egg has a relatively small air sack but as the egg shell is slightly porous over time the size of the air sack increases as the contents of the egg slowly evaporate and dry out. As an old egg will have a large air sack, when put into water it will bob up and float. This test is still used in our modern times to test to see if an egg is fit to eat before cracking it.

Because the size of the air sack changes over time, interfering with the results of our density test, it is very important to use a fresh egg which has not yet had time to evaporate. It is also important to check the supposedly fresh egg as eggs sold in the supermarket are not always as fresh as you might assume. To do this, before every density test calibrate the egg in plain water to make sure it sinks flat to the bottom, with both butt and tip level (see figure).

The density or specific gravity of water is 1. When minerals like salts or sugars are dissolved into water the extra particles change the density of the solution by making it more crowded, or dense. A fresh egg has a density between 1.03-1.1 g/ml which means it would be borne, or float, by a solution of a density matching or exceeding 1.03-1.1 g/ml.

Why would it be important to check the density of the must? In history, all honey would have been used for brewing, not just the easy to extract. While the centrifuge type honey extruder is a modern convenience and allows for high yield with minimal processing, before this useful invention it would be extracted by hand, first by leaking and breaking up the combs, and then by washing the broken up combs in warm water to dissolve the remaining and any crystallized honey. This honey/water mixture would be of unknown strength and would have to be checked before brewing, as not enough fermentable sugars could result in an easily spoiled brew and too much sugar can inhibit yeast growth and stall fermentation. Likely, master brewers of the time could eyeball or taste and have a perfect brew each time, but for the less initiated it is nice to be able to check with a visual aide.

While by the end of the 17th century a hen’s egg would be specified, with differences in breed, health, age and diet the hens’ egg size & shape can differ quite significantly. For the best results, compare several eggs and pick out the most average one.

How to use the egg

Historic brewing recipes are not so certain whether the must should be heated or not, and often recommend to test the strength before boiling, apparently not realizing boiling evaporates water thereby changing the density. The brewers are also not quite able to make up their mind if the must should be cold, blood warm or boiling, which could indicate they did not understand how temperature affects specific gravity either, as shown in the 1597 Dutch beekeeping manual Van de Byen by Theodorus Clutius; “and let it cook / until an Egg can float in the liquid / then set it off the fire”, which could also resulted in a nicely boiled egg if the egg is not removed quick enough… The 1616 Danish cookbook Koge Bog advises to “put an egg or two into this lukewarm brew so that there is a part of egg as big as a 2 shilling over the water then it is sweet and fat enough” which probably is the most accurate measurement.

Fig. Schematic of coins used, notice the similarity between a Groat and our modern US Quarter.

Several 17th century brewing recipes mention the use of coins, especially two pence and the groat, in conjuncture with the floating egg. The diameter of the coin would be used as a size measurement of the diameter of the bit of shell sticking above the water surface, and this measurement averages a ratio of 3:1 to 4:1 of water to honey dilution, which are correct fermenting ratios.

By the 17th century, as most coins are mechanically minted, diameter fluctuations common in medieval coins is a thing of the past. As the diameter of an ideal groat is circa 23-24 mm and the diameter of a US quarter is 24.26 mm (0.955 inches), a quarter makes a perfect stand in for a Renaissance groat.

The table below matches egg position with specific gravity, giving us an idea of what to aim for. Egg readings are given for both 10% tolerance yeast (ale yeast) and 12% tolerance yeast.

To make sure there is enough sugar for the yeast to feed on, the egg should float. But if it starts to tip over and not reliably float point up anymore, the solution has become too strong with too much honey sugar for the yeast to properly work and fermentation will likely stall. The average range of 1.08 to 1.12 g/ml at which the average, round fresh laid egg floats point up is also the ideal range of sugar content  for starting a successful brew using standard yeast.

So after all this, where do you start?

With a fresh egg no more than two days old, of the roundest kind, weighing less than or about 2 ounces. Calibrate the egg in room temperature water to make sure it sinks flat. Make your honey must, heat and evaporate as needed, let cool down to blood temperature, and add your egg. If the egg sinks the must is too weak, if it floats close to tipping or tips, the must is too strong. If it is too weak, add more honey, stir well, and try again. If too strong, add a little water, stir well, and try again. As you can imagine, it is easier to start with too strong a solution and dilute it, than to start with a weak solution and try to incrementally dissolve more sugars into it. If your must does need some strengthening, make a strong honey or sugar solution first, and incrementally add that to your must, not straight up undiluted honey. 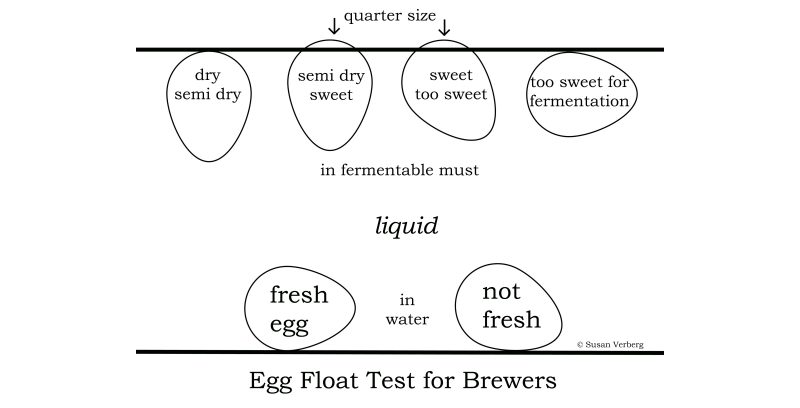 It has been my experience that if the egg tip touches but does not break the surface of the must it will ferment to a nice dry wine mead. If you prefer something sweeter, aim to have the egg break the surface and show an area about the size of a quarter, or a bit less. If at first you don’t feel at ease trusting your fresh laid egg, use a modern hydrometer the first few times, in conjunction with your egg, to get the hang of this technique. Before you know it you’ll reach for an egg, conveniently located in your kitchen.