Anyone thinking of Vikings also thinks of mead, the two seem inextricably linked. It should seem surprising to then find that there was basically no local honey production in Norway and most of Sweden before the middle of the 18th century, and even after, access to honey was extremely limited. Maybe the reason mead is mentioned so often in the Saga’s is because it was such a rarity – was it truly only a drink for kings and the Gods? The earliest recorded account of the production of mead in connection with the Northern lands is in the Historia de Gentibus Septentrionalibus (History of the Northern People – 1555) by Olaus Magnus – Archbishop-in-exile of Uppsala, as at that time Sweden was not Catholic anymore. During his exile Olaus Magnus wrote extensively about his home lands, including a chapter with instructions on making mead. He then added two chapters on making Polish, Lithuanian and Goth mead. As this broadly overlaps with the trading areas of the Viking era one wonders if most of the mead consumed by the Vikings was imported from down south, way down south. Another early cookbook with mead recipes of the Scandinavian region is the Danish Kogebog (1616), which literally means cookbook. It includes two chapters on mead, with much practical information including which herbs work well to spice the mead, and the numerous health benefits of mead. It is clear mead was made by the Danish, but then, even though Denmark is part of Scandinavia it is geographically connected to Germany, not the Scandinavian peninsula, and much more southern and more hospitable to beekeeping.

From Chapter 23 of Olaus Magnus: “On the voluntary drowning of King Hunding in mead or hydromel.”

And that is the crux of the matter: looking closer at the geographical setting of the Northern lands as compared to the geographical distribution of bees shows something interesting. Scandinavia lies just on the cusp on the natural range of honey bees. The south of Sweden and Denmark are within the native distribution of honey bees, but their natural range ends just south of Norway. This excludes central and northern Sweden and near all of Norway from local honey production, although theoretically, honey bees might survive in the south-eastern corner, right around Oslo and down along a little way on the western side of the Oslo fjord. The reason for this is not the cold, as one might assume, but the short duration of the flowering season. Honey bees collect pollen and nectar from flowering plants, which is their food. They concentrate nectar into honey as an emergency food supply for the hive, among other uses. As the flowering season that far up north is too short, the bees run out of honey and starve to death before the next season begins. 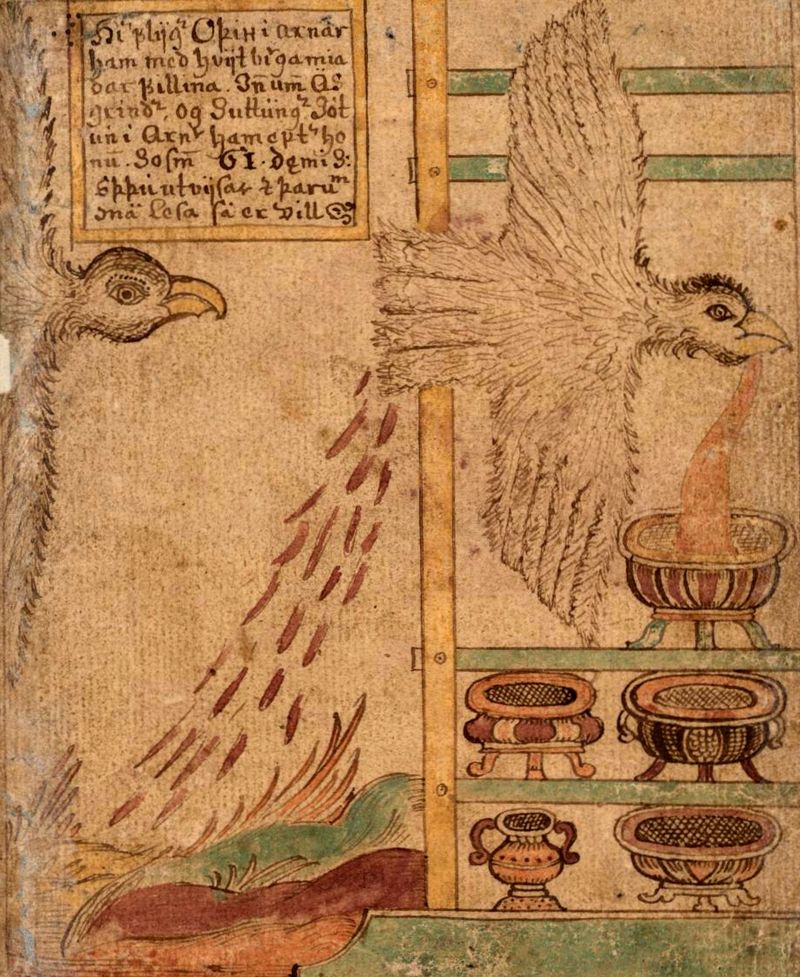 Chased by Suttungr, Odin spits the mead of poetry into several vessels. Some of it accidentally goes out the other end. Illustration by Jakob Sigurðsson, an 18th-century Icelandic artist. (Public Domain)

If that is the case, then why is mead so often mentioned in the Norse mythologies? Maybe it truly was a matter of wishful thinking. There is less mention of mead in the sagas, which claim to be stories about actual people. One of these mentions from Egil’s saga recounts of someone sailing to Denmark to buy honey, as well as other things, which makes sense if there was no local beekeeping. There are other mentions, but on average it seems real people mostly drank milk products and beer. Surviving records show wine was considered the best by the Norse, with records of wine traded from the Mediterranean up to Scandinavia back to the year zero, then mead, likely imported either as honey or fermented, and then locally-produced beer (coincidentally, or maybe not, this is the same order in which Olaus Magnus has listed his wine, mead and beer descriptions and recipes). True to human nature, it was not the easily available product which was considered finest – after all, it is always that which is hard to get which is valued above all others.

But: there does seem to be one caveat in dealing with Viking age beekeeping from a modern point of view. Much of the Viking era coincided with the Medieval Warm Period, which happened from about 950 to 1250 CE. It is conceivable beekeeping was possible then, even if only in an opportunistic wild beehive robbing sort of way. Eva Crane’s World History of Beekeeping and Honey Hunting recounts of a find of “tens of thousands” of dead bees from 1175-1225 CE in the Old Town of Oslo, which could mean purposeful beekeeping. Or it could be a singular large hive which died spectacularly all over the town, as one hive can contain from 10,000 to 60,000 individuals. But it is feasible people did keep bees in at least part of Norway during that time, and later lost the knowledge when the climate changed again, and the northern lands became too hostile for bees. More likely is that local beekeeping never was very widespread, but as the famous traders and raiders the Vikings were known for, they bought and plundered honey from abroad.

The popularity of mead waned in the rest of medieval Europe as the production of honey slowed and prices rose and the consumption of beer spread. When The Medieval Warm Period was followed by The Little Ice Age, lasting from about 1350 to about 1850, this also contributed to the decline of medieval honey production, especially in short season climates like northern Europe and southern Scandinavia. And with the increase of population and thus agriculture, old growth forests which provided nectar were cut down and wild flower meadows were planted with grains, which yield no nectar at all. By the 14th century a gallon of French wine was cheaper than the honey needed to make a gallon of mead, and by the 17th century imports of cheap sugar from the West Indies mostly replaced the use of honey in cooking and brewing. Mead survived well into the 18th century in central Europe, where raw materials were easy to get from the large forests they still had, and in the rest of Europe in different versions as a drink for the sick. It could well be that mead did not only decline because of cost, or the improving quality of other drinks, it could also be because mead was said to be so good for the drinker’s health, it became associated with the sick and the weak.

Example of sheltered beekeeping from the European Alps (left – Permaculture.uk), in which individual hive boxes are communally housed within a larger structure to help the hives make it through the winter cold. Another concept for Viking Age appropriate hives, similar to log hives as found in illuminated Medieval manuscripts (right – GreenMan.uk)

Whether or not the Vikings were active beekeepers, from the numerous mentions of mead-drinking in the Saga’s we know they sure enjoyed the results, or at least wished they could. Surprisingly, it took until the middle of the 18th century for someone to figure out how to keep bees successfully in the Oslo area. He did this by closing down his hive with a perforated screen in early spring to prevent the bees from flying and feeding the bees watered down honey. That far up north, the bees run out of honey and wake up too early in spring to go in search of flowers while there still is snow on the ground. They go in search of food because they are starving, and instead freeze to death. Keeping them cooped up and fed they can be kept alive until the rest of nature wakes up and there is food for them to find – the similar as our modern practice of feeding sugar water. From that point on, beekeeping spread, and resulted in a strong tradition of beekeeping, especially in the south-eastern corner of Norway and southern Sweden, that grew into a local mead-making tradition.

Much of this information comes from an ethnographic survey on farmhouse brewing issued by the Norwegian Ethnographical Research Institute (NEG) in 1952 and 1957. This questionnaire ran 103 questions, and questions 99 to 103 dealt with mead, and the results were surprisingly consistent: most of Norway at that time had no mead-making and barely any mead drinking tradition at all – except for a small cluster south of Oslo, and down into southern Sweden. Of the small handful of Norwegian responses, one replied people collected wild honey, and four replied independently that people who kept bees sold the honey, but then made mead from the honey that remained stuck to the wax combs. The beekeepers would dissolve the honey in hot water, boil it, add some spices, and then ferment it. A process very similar to the washed comb mead making techniques found in medieval cook books.