The things we learned this second trial: what worked, and what are we going to work on some more. And no, the brew did not sour this time, and yes, the recipe made a fine drinkable juniper ale. With only a wood tub, a fire and some hot rocks. Who knew historic brewing could be this much fun! 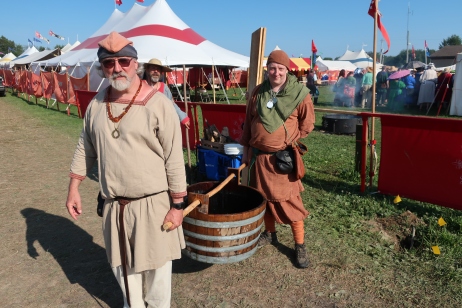 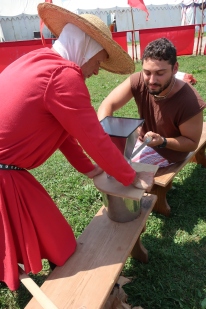 Our second brewing workshop happened at the Great Pennsic War, a large two week re-enactment get together in rural Pennsylvania. The workshop was allocated space in one of the Royal encampments on middle Saturday in the center of things, right next to the University, which meant many brewers and prospective brewers could stop by, see what was going on, and actively participate. There was no shortage of tub scrubbers, malt grinders and water haulers here!

For our botanicals I chose not to use the mugwort again as I think it contributed greatly to the vegetative bitter taste in our first trial. We again used a handful of yarrow, this time dried, a handful of bog myrtle and some yellowed hops. I also made a separate boil with 2 oz pre-packaged hop pellets “Cluster Fugget”, another free sample from the 2019 Homebrew con. Because we were fermenting on-site in questionable sanitary conditions I added the pelleted hop infusion to the wort hoping it would aid in preserving for the short week the brew would need to ferment. The wort did not sour this time – we also pitched yeast as soon as the temperatures were good – and the small amount of hops used did not add significantly to the flavor of the ale.

Things we did the same (from the first trial):

The wooden half-barrel mash tun works surprisingly well. It does need conditioning and a good clean after, and before use, which makes using wood a bit more involved from using stainless steel. As the tub had been sitting for a few months it had dried out and the staves had loosened. Two days before brewing I filled the tun with hot water and had it sit in the sun. It stopped leaking within 24 hours. I then dumped the water and let it dry facing the sun, which has antimicrobial properties as well, so we could haul it to the brewing site empty. Having ears, and a long handle, makes moving this 30+ gallon half barrel a breeze, without stressing any loose staves and have the barrel fall apart due to manhandling.

Things we did differently:

We used the same type of granite rocks of around grapefruit size, heated in a large wood fire. But we started the fire on a layer of charcoal briquets (one bag of barbecue coals) which knocked a couple hours off of getting a functional bed of coals to heat the brewing rocks. We used metal tongs to move the hot rocks, but instead of using fireplace tongs I had found a pair of metal blacksmithing tongs for round stock which worked extremely well and look quite similar to tongs from traditional Nordic brewing illustrations. While the tongs worked great, the firepit surround did not work as well, and caused for some shriveled knuckle hairs as it really concentrated the heat upwards which made it hard to remove kettles and hot rocks. Next time, no surround, and I heard rumours of one of our brewers finding 4 foot handled tongs.

I made a stand for the mash / lauter tun based on historic pegged-leg exemplars to keep it at a good working level with enough space underneath for a bucket to drain the wort. At first we used three logs, but those don’t pack up neatly and are hard to haul around (and technically illegal outside of 50 miles). The design was inspired by the traditional Nordic brewing illustrations of tub stanchions.

What we learned for next time:

Like last time, we used a shared mash and lauter tun. While this is not unheard of, there are traditional brewers out there who did this, I do not think it is as helpful as it sounds to be. The filter bed interferes with stirring, which in turn interferes with a good temperature throughout the mash. To help this, we pulled (cold) wort from the bottom and added it back to the (hot) top. The only reason we did this set up again was that I did not have room to transport two wooden tuns. Trial three will feature a separate mash tun and lauter tun.

We need larger capacity for boiling water and making juniper infusions. We need a proper kettle. I have one I can, and have, boiled a whole goat in – which might be a wee bit too large – but if needed, that’s what I’ll bring for future use. It’s good to own a truck.

The brew tasted overwhelmingly of juniper, especially for us who are not used to the taste. I am glad we had our brewers do a taste test of straight juniper infusion, so we knew exactly where the taste came from. Nordland mentions traditional brewers using minor amounts of juniper, only as a filter in the lautering tun, but also mentions traditional brewers making strong juniper infusions to sparge the mash with. Likely our brew was somewhere in between, not as mild as it could be, and more of an acquired taste than us modern brewers are used to. Two things we can do to limit this flavor is to avoid adding any juniper branches with bark, and to not heat the mash on top of the juniper filter bed. And as we’re planning to separate mashing and lautering anyway, this will be an easy change.

Brewing in Pennsylvania during the summer month of August also brings another challenge – ambient temperatures. Daytime temperatures are in the nineties, if not higher, with overnight temperatures between the sixties and the eighties. Standard ale yeast does not like this very much. It also takes a long time for the wort to cool down without intervention to be able to pitch the yeast. A yeast which does like high fermentation temperatures, which can be pitched hot, and attenuates quickly, would be the Nordic yeast kveik. This might not be coincidental. We did two yeast trials, one part with WB-06 and one with Nottingham and found that the one with Nottingham displayed definitely floral overtones, just like kveik is known to do, and that our taste testers preferred this flavor profile. We will be doing kveik trials this winter to learn more about its likes and dislikes.

Brewing in wood, on-site, to drink within a few days, is completely feasible. People in general are mesmerized by the process, and brewers can not be shooed away. With a little bit of effort, and an oak wine barrel, this way of brewing would be attainable to anyone who is interested in low-key historic brewing processes, and drinking something enjoyable which will not be duplicated time and again. We had people scrubbing, grinding, hauling water, splitting wood, stirring the mash – and ooh-ing and aah-ing anytime a hot rock violently boiled the mash.

We fermented part in a plastic bottling bucket (sanitary, and with built-in dispensing tap) and, after the initial fermentation, added part to an oak barrel. The couple of days it was in the closed barrel it did built up pressure, and made for a nice tingle-on-the-tongue mouth feel. Both bucket and barrel were well sampled at our Closing Party, with numerous return customers.

And at home I now have some left over party booze slowly oaking in my cleaned out barrel. My barrel will be sterile for the next demo, and we’ll have some drinkable booze to boot. Proost!

For more on our Iron Age brewing experiments, please see my previous post at: