The Scandinavian Saga’s show the Vikings understood how to work with yeast to brew beer long before the first published Nordic books on brewing. Halv’s saga speaks explicitly of yeast, called dregg. Other words found in sagas are jǫstr, related to the Swedish ‘jäst’ and gerð, related to the the Danish-Norwegian ‘gær.’ As well as kvikur or kveykur, both linked to the adjective ‘kvick’ and meaning that which sets something in motion, related to the Norwegian ‘kveik.’

Many different methods of preserving yeast have been used over time, including the baking of yeast cakes with the addition of flour and the drying of yeast sludge on rough wood logs, straw wreaths of whittled yeast rings. For more on the history of Scandinavian yeast devices, check out my previous post at:

The most curious piece of brewing equipment, the yeast ring is mostly found in traditional Scandinavian farmhouse brewing. It would be used by drying yeast sludge on wreaths of straw or braided bark, as well as rings of small pieces of whittled wood. For this type of storage, the sludge could be dried quickly with the help of sterile hot ashes which would absorb excess water, the heat would help expedite drying, and the alkaline environment it creates would be antimicrobial. When Sir Arthur Mitchell toured some of the western islands of Scotland in 1768 he took note of how the natives of the Isle of Skye revived their yeast preserved on a wreath:

“The natives preserve their yeast in the following manner: They cut a rod of oak four or five inches in circumference, twist it round like a w[r]ythe, and steep it in fresh yeast for some hours, then hang it up and dry it. And whenever they need yeast they take down the twisted rod, and put it into a covered vessel amongst two or three pints of luke-warm wort, so in two hours thereafter they have fresh barm fit for immediate use.” 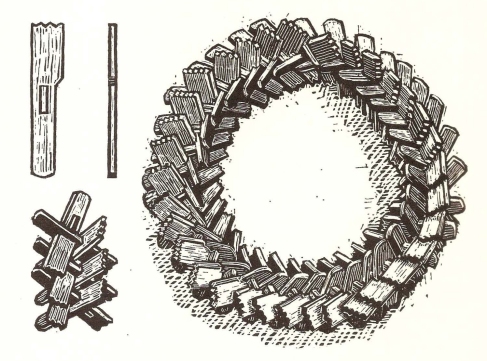 Design of a Danish yeast ring, from the book Landbokvinden (Back to the land, 1964).

There are many different ways to make a yeast ring. Some are made simply from tightly twisted straw, others from strips of bark expertly braided together. Most are made from wood, often birch or beech, and most are made from narrow mortise & tenon pieces which are interlinked together. Some have a raised wedge head which keeps the pieces locked in, others have an indentation to the side. Some are square edged, some have rounded edges, and some have a decorative serration at the top, sometimes even at the bottom. Most have a square wedge head when seen from the top, and the measurements are often 2 wedge lengths makes up one body length (ratio 2:1), but sometimes shorter, at one and a half to 1, and sometimes much longer. On average, a good ball-park design to match many of the extant artifacts is about 75 pieces, or 25 sets of 3.

A modern reconstruction (left) made out of plastic with a 3D printer by George Hart (http://www.georgehart.com/rp/torzle/torzle.html)

A traditional reconstruction from the Hungarian book on whittling called Remeckel a bicksa (The knife is great, 1958).

This version seems to be the most common design and is probably indicative of the process: the many, many pieces would be carved or whittled by hand, with a knife, and the wedged end and slot (mortise) would not be problematic to create. This technique might also explain why it perhaps originated in Scandinavia – an area with a strong whittling tradition and long, long dark and boring winters.

The key to the puzzle

There are several options for the key piece which closes the loop, and could theoretically open it again. It is not quite clear what the benefit of taking it apart would be, except perhaps for a deep clean before it goes into storage (or to the museum). There are several museum artifacts which are disconnected (often also incomplete); the majority of the artifacts are connected and in one piece. None of the four key versions mentioned below are easy to re-open, and are all prone to damage when done so repetitively.